How we fixed it. So how did it happen? Why would an implant break? Is this common? Is this something I should be worried about? And the reality is, is it’s really rare for an implant to break. But this was kind of a perfect storm of not placing the implant correctly.

And I’ll explain how they could. Whoever placed I don’t know but how they could have avoided that. And then some philosophy about why the force placed on that tooth was just way too much, causing this kind of perfect storm. Broken implant. First off, implant was placed not deep enough, so the implant itself was placed in bone.

How to Find a Medical Marijuana Doctor in Arkansas

How to Be Empowered About Your Health

Placing the implant at the right depth is important. But this surgeon, whoever placed it, clearly did not place that implant deep enough. And what it did is it created a crown that had to be too flat and to direct it had to go straight out to the sides.

And so it had the ability to take on a lot of cantilever forces. What we want is an implant that’s placed in the bone fully. So it’s supported by bone. Right. If the implants high, it’s supported by your gums, which isn’t going to do anything. But if it’s buried into the bone, not only is the titanium holding together, but the bone is holding it together. 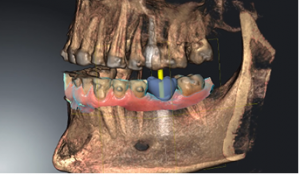 So that makes that implant really hard to break, almost impossible to break. But the then the crown comes off of that more on a trajectory like this rather than just straight out and creates these really strong. We call them cantilever forces. So that was already bad enough, didn’t place the implant low enough, but also placed an implant above. This is an zirconia crown placed on the tooth above that hits directly on that front portion, or we call it mesial industry, but mesial portion are front of that lower implant crown

The reality is the best thing to do would be to figure out why he’s destroying his teeth and fix that first, not try to just over strengthen one thing that you just did. You just show up and put in a really strong restoration go. So now as his teeth continue to wear it out because that was never addressed, he puts way too much force in the front portion of this tooth. It breaks the implant. And now we’ve got a loose crown and a broken implant.

How do we fix it?  I wish it were easy. That’s why you want to make sure the implants are done correctly. Because if they do fail like this, this is not an easy fix.

We actually had to take the crown off and we had to take the full implant out. So implants taken them out. Most people probably wouldn’t enjoy that. I can tell you honestly. A little bit more involved. You lose some bone in the process. It’s not enjoyable for the patient because it’s expensive.

They don’t love it because now they got an implant they paid for and you got to take it out. So fortunately, I’ve never had to take one of mine out, but it does happen. And so this one, I took this out for them and then we have to let that heal for a few months. Right? We got to give it some time for that bone to grow back in from the coring out and creating that space to remove the implant.

We had to grind around this implant with a special that’s called a Reformation BR because that implants fully integrated into bone. So that bone is locked in, that implant locked in. I can’t just go grab it and pull it. So we have to actually grind the bone around it out to create a core and then remove the implant by backing it out and, you know, spinning it back out once we get enough bone off of it.

And so now we get this implant out. Then we got to let it heal. Let me come back and we place an implant at the proper depth so we get it fully buried in bone and we races bite back up and then we put a new crown on it. And then the last thing is kind of like, how do we avoid this completely like you know, when I shared with you what happened and why it happened, how I fixed it, but how do we avoid this completely?

The great news is 3D implant dentistry has been around for a while Unfortunately, not everybody has adopted it.

3D guided implants are the safest. They’re the best. They’re the most accurate. They’re the what we should be doing for our patients. I think there will be a day where if you’re doing implants free handed without a 3D guide and not perfectly placing the implant in the in the proper angulation and depth in bone because it was all pre surgically planned in software, then I think it’s going to be kind of taboo right now.

There’s some big value to find a dentist that has 3D guided implants. You can avoid the challenges that this patient had and then also have a wonderful implant that lasts the rest of your life that you can floss and clean around and looks wonderful. You want the tooth that just is healthy and looks right like it belongs there. It doesn’t destroy other teeth.